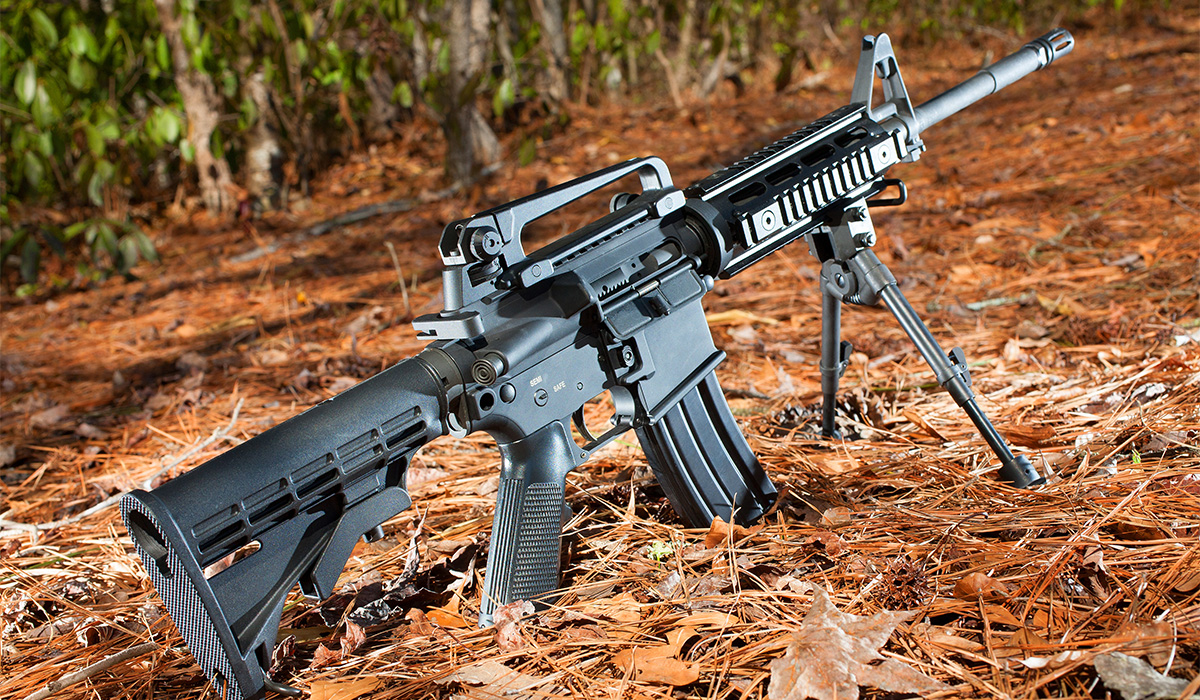 The fate of the AR-15 style rifle always seems to be hanging in the breeze when it comes to politics. Every major election brings a surge of demands for bans from people that would rather strip you of your rights, than actually do anything about the real issues. When you’re preparing for the next big election-time rush to the gun store, we want to help you save a few bucks before prices rise from demand. Here is our list of the five best AR-15s under $1,000.

A few years have passed since we originally brought you a look at The 5 Best AR-15s For Under $1,000 and the gun world has been thrown into a frenzy. A sub-grand AR us difficult, but not impossible, to track down. Need some help? If you’re looking to buy a new rifle, we’ve found a few you need to take a look at. And another thing – With the strength of sales, walking into your local gun shop and finding an AR on the shelf is probably pretty tricky. While we are going to mostly stay as far under the $1,000 ceiling, availability is going to make that one tough. If we go a few bucks over for a great rifle, it’s up to you if you want to spend the money. Here are the five best AR-15s for under $1,000 that are available today.

I’m going to break the rules right off the bat, but so what. We’re talking an extra $10 and for that, you get an amazing firearm. The Saint from Springfield is a top-tier rifle that you honestly would expect to pay more for, but you don’t. I had a cool opportunity to try a bunch of AR rifles back to back and in rapid succession. The Saint immediately feel high quality. Nothing rattles that shouldn’t and the rifle feels great. One thing that often gets overlooked in an AR is the trigger, and the Saint has a great one. Light pull, no creep and good feel, combined with an accurate rifle and you would walk away from the experience the same way I did after shooting it – dang, that’s one heck of a rifle for the money.

Bottom Line/One of the best for this price range. Period.

The DB15 packs a lot of value into a really sweet price. If you don’t know who Diamondback is, they’re coming out of Florida with some really great AR-platform rifles that are 100% made in the USA. This rifle is chambered for 223 Remington/5.56 NATO. It has 1-8 RH rifling which gives you pretty good accuracy. The folks at Diamondback Firearms like to hunt, so these firearms make great platforms to set-up an amazing predator and varmint rifle. It uses a gas-impingement system and Diamondback produces many of the parts in house with their CNC facility. The handguard is slotted and skeletonized for weight. The Picatinny rail runs the full length, giving you a wide range of sight and scope options.

Cons/There’s better stock designs out there

Ruger is one of the biggest brands in firearms and they are also known for being a bit on the conservative side when it comes to new product introductions. When everyone was coming out with an AR, Ruger slowly crept in, not with a bargain model, but a high-end model they named the SR 556. That model had a gas-piston design and was exceptional. I did a course at Gunsite using one and loved it. However, the design and accompanying price tag proved a bit much for the buying public and Ruger stepped in with the Ruger AR-15 line, which was a simplified variant of the platform that came with a MUCH lower price. The SR may be gone, but the AR from Ruger has proven to be a great rifle. This version comes with full Magpul MOE furniture and 1:8 RH, 5-groove twist barrel and open sights. This is a fun, dependable rifle that comes in under the price mark. You’ll like it.

Cons/You don’t have as many options for set up

I know, I know – I’m doing it again. Again, it’s really close and it’s a Stag! Stag Arms has recently completely rebranded the entire company, reorganized and moved operations, but one thing remains the same – Stag ARms makes really amazing rifles. It wasn’t long ago that if you asked a lot of people in the know, “what AR should I buy?” The answer would have been  a Stag without hesitation. Today, there’s a few other brands that get thrown into that conversation, but the fact remains – you get a lot of high-quality rifle for the money. This AR has a 1:7 twist rate and an M16 bolt carrier group. There is a 13.5 inch free-floating handguard with a full-length rail for options in sights and accessories. All the furniture comes from Magpul and combines to make this a top-tier rifle and a great buy.

Cons/Another that sneaks over the line

Bottom Line/A great quality rifle that you’d be proud to own.

The Radical Firearms RF15 is another great AR that doesn’t beat your wallet up. Right off the bat, you’ll notice the full-length handguard with a full-length rail and lots of options for mounting whatever you’d like. It has a SOCOM contour barrel with a 1:7 twist rate. These are really nice rifles and it shows what builders can do with the universal AR platform. I once went on a midnight hog hunt with a rifle that was exactly the same as this one – different manufacturer, but still, extremely close. The rifle was set up with a green laser, IR illuminator and night vision optics. I added a forward grip midway down the barrel and a bi-pod on the end. I like the full-length handguards because of all the options it gives you. If it’s done right, like the Radical RF15, the weight is negligible. The three-gun guys love them for this very reason.

The traditional cartridge the AR-15 is chambered for is the 5.56/.223. The majority of ARs you’ll find will come set up for this round and it’s great because it’s (mostly) a cheap ammunition to find, with some high-performance variants for competition and hunting. Just be aware that some .223 loads are on the hot side and may not be best for the AR platform.

.300 Blackout is another popular one. This cartridge was developed to give the AR-15 more oomph than the standard .223/5.56 round while still fitting in a standard magazine. The .300 BLK is a great subsonic cartridge that can be a great hunting or home defense round, and it works very well with a suppressor to protect your hearing.

One we’re seeing more and more of is the 350 Legend. This is an amazing little cartridge that Winchester developed not long ago. The basic way to describe it is to take a .223 and neck it up to accept a .357 bullet. It is a great hunting round and Midwest deer hunters are jumping on it. Remember a few years ago when the 6.5 Creedmoor was the hottest ticket in town? Every gun company had to offer it or get left in the dust, so to speak. Recently the same can be said for the 350 Legend. Like the .300BLK, the 350 Legend is low recoil and packs a bigger punch. Plus the ammo is, or at least was, relatively inexpensive.

There are other cartridges available for the AR-15 platform, too. Drop a comment with your favorite.

During the boom of AR sales just a few years ago, everyone who owned a pair of Vise Grips got into the AR manufacturing business. That’s not necessarily a bad thing. It does, however, make it a lot harder for prospective buyers to know which companies know how to make a quality rifle and which recently shifted production from selfie sticks to AR-15s. Even when we filter out the companies that recycle aluminum foil burrito wrappers into bolt carrier groups, there are still a ton of great deals out there, so this list is just a starting point. Availability limits us, so rather than get all cranky that your rifle isn’t listed here, leave a range report on your best pick in the comments.

In other words, the best AR-15 is the one in your hands. These sporting rifles are great fun to shoot and make great hunting and plinking rifles.

As many of you know, AR stands for Armalite Rifle, Model 15. A variant was adopted by the United States military and became the rifle known as the M16. There are major differences between the two, however, that separate the two firearms. The biggest, of course, is that the AR-15 is strictly semi-automatic. The M16/M4 has either a 3-shot burst, or fully automatic selection, depending upon which variant it is within the military structure.

While the two rifles look similar, internally, they are vastly different, with many variations coming from the different manufacturers who produce the AR. It has proven to be an excellent target, home defense and hunting rifle, with thousands of people using these accurate and reliable firearms for sporting purposes.

As you may have noticed, finding an AR-15 can be pretty difficult. There are several reasons for this.

One thing that cannot be overlooked as well. People that own AR-15s are exposing these firearms to new shooters almost daily, and those new shooters are buying them as fast as they can. And they are doing so not because of any of the reasons listed above for the most part. They are doing so because the shooting sports are an amazing way to spend time and enjoy the outdoors. And let’s face it, shooting an AR-15 is just a whole lot of fun. Target shooting, competition shooting, 3-gun shooting… all are growing as safe, legal and fun activities for all ages.

What makes the AR-15 fun to shoot?

AR-15s are fun because they are accurate with pretty low recoil. They also fit a wide range of people due to the adaptability of the platform. They can also be pretty inexpensive to shoot, making them a great target rifle.

How many AR-15s does a person need?

I saw this one on the news and I laughed and laughed. The correct answer is always the same – Just one more.

Tom is the primary author of the Insanely Practical Guides series of how-to books. He believes that shooting can be safe and fun, and works hard to make the shooting world easy to understand. If you want to learn about the world of guns, shooting and the American way, check out some of his books. Have a laugh or two. Life is too short for boring “how to” books.
You can find print and ebook versions at Amazon. For more information, check out InsanelyPracticalGuides.com
Feel free to visit Tom at his website, MyGunCulture.com. It’s a half-cocked but right on target look at the world of shooting and all things related. If you want to learn with a laugh about guns, shooting products, personal defense, competition, industry news and the occasional Second Amendment issue, visit him there.

We are committed to finding, researching, and recommending the best products. We earn commissions from purchases you make using the retail links in our product reviews. Learn more about how this works.